It's Bea's birthday and Milo has once again forgotten to buy her a gift, so he makes a promise to get her the greatest present of all time, a lock of Brandon Bubbler's hair. He sets out with Oscar, Albert and Jumbo Shrimp to find Brandon and fulfill his promise.

Snake says that her and Mouse ought to get their band back together. Mouse tells her that they never had a band, and Snake tries to remind her - she played the drums and Mouse played the guitar. Mouse tells Snake that she likes to hit things, and asks her if she's sure that she didn't play the drums. Snake corrects herself, saying that Mouse is right because she used to sing. Mouse tells Snake that it's all coming back to her, and asks Snake why they broke up. Snake starts to sing, which reminds Mouse about why they broke up. She also announces that the reunion tour's off. 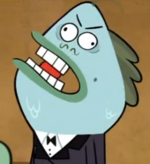