The series follows Milo, Bea and Oscar, three best friends who live in a giant fish tank trying to navigate their way through the choppy waters of high school. Together they experience the typical life challenges and triumphs, including friendship, dating and sports, along with more atypical situations such as giant lobster attacks and, with the use of special land suits, school field trips to the hamster cages.

Main and some recurring characters in Fish Hooks.

The main characters are Bea, Milo and Oscar. Bea is the overly dramatic fish and awaits for her chance at stardom. Milo is the adventurous fish, and is always looking for a chance to party. Oscar is the high-strung fish and enjoys playing video games. The show also includes many of the fish's friends, all of which go to Freshwater High with the three. Jocktopus is the tentacled octopus bully, while Albert and Jumbo, the smartest fish at Freshwater, get bullied frequently by them. Clamantha, Shellsea, Koi, Esmargot and Finberley are Bea's friends, who usually spend time together shopping at the mall or having slumber parties. There are also other students at Freshwater, including the evil crab Randy, the most popular student Steve Jackson, Jocktopus' henchman Pass, Punt and Fumble, Jocktopus' girlfriend Piranhica, the farming-obsessed student Bo Gregory and the French posh student Hugh Edmondson. There is also Freshwater's teachers, all of which are either boring, over-excited or not willing to do their job.

The series started out when Noah Z. Jones was contacted by Disney executives after seeing some of Jones' work online. They asked Jones if he would like to do anything with his drawings for a television series. Jones sent Disney five ideas for a short, and out of those ideas, Disney picked one that would eventually become Fish Hooks. Originally, the series was to revolve around a band, but the band angle was dropped in favour of a more situational comedy approach, because there was a lot of band concepts for series around at the time. [1] During early production, Fish Hooks was called Fish Tales. The original pilot is likely to be an early version of "Bea Stays in the Picture" (the pilot), and parts of it have only been seen in a promotional advertisement for 2011 Disney Channel TV series and movies in Latin America, and at the 2011 Comic-Con panel.

On October 30, 2009, president of entertainment Gary Marsh announced that Fish Hooks was under production. He said of the show, "The 'Fish Hooks' team has created one of the most original, inventive animated series on television – bringing an ingenious twist to the classic archetypes of high school life." The series is produced using a mix of 2D digital animation, CGI, and photo collages.[2]

On August 26, 2010 a press release was released, which revealed Fish Hooks' recurring cast and premiere dates. A schedule of releases was also released: 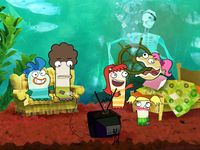 A promotional image released for Season 1.

21 half-hours were produced in the first season.

Picking out the details[edit]

Jones chose to do a series on fish, because fish are easy to draw and are very colourful. "They look like little gumdrops with faces," Jones said. He chose the location of a pet store, so the fish could have a massive world to explore. Noah said that he chose a high-school environment because it's a rich environment for stories, and high school is a time when friends are most important to your life.[4]

Sometimes, when the crew designs a new character, they make it look a bit like their voice actor; usually it's by accident. When the board artists pitch a new episode, they show a rough comic-strip on the story, and show it to the rest of the crew. When producing characters, the crew of Fish Hooks create the character and come up with a story to go around it, and sometimes its the other way round.[4]