The students of Freshwater High prepare for their prom night. On the night, however, things don't go as well as expected when Angela pays more attention to her video games than Oscar, and when Bea's date Steve Jackson goes missing. Meanwhile, Milo and Randy have both taken guinea pigs to prom and they keep switching dates.

Everyone at Freshwater High is excited for prom. Bea had been asked to the prom by Steve Jackson, Oscar had managed to get Angela to go with him to prom and Randy had persuaded Milo to take his guinea pig date's sister to the prom. Raska Boosh was invited.

At prom, Angela uses special head-gear to play a video game. Milo and Randy keep switching dates because Randy finds his boring. Steve Jackson goes to get Bea punch and then finds a spillage on the floor. He goes to get cleaning supplies but is locked inside of the cupboard. Raska talked to Steve Jackson for a few moments.

Oscar gets tired of Angela not paying attention to him, so he shuts her game off and tries to persuade her to dance with him. Raska causes trouble during the process. During the process, he accidentally calls her 'Bea', and she leaves, before telling Bea that Oscar's all hers. Meanwhile, Bea was upset because she had spilled punch all over her dress.

Milo and his date are voted Prom King and Queen, much to Bea's dismay. Finberley announces that the slow dance is starting, but Bea doesn't have a date; neither does Oscar. Raska was under arrested for causing trouble and Raska yells out he'll have vengeance. Bea goes to the Hokey Poke in tears to drown her sorrows, and Oscar follows her. They comfort each other, before they dance together. Bea kisses Oscar on the cheek, making it his 'best prom ever'.

This, and "Fish School Musical", are the only episodes to not have Snake and Mouse in the credits tag.Angela is putting her new gaimng helmet away while jumbo is talking to himself about the loss about his robot girlfriend, they look at each other, hinting they will fall in love, meanwhile Steve Jackson is still trapped in a storage cupboard. Clamantha pushes the chairs away and opens the door. Steve thinks Clamantha is going to let him out, but instead, Clamantha goes into the cupboard and shuts the door behind her.

[Oscar has turned off Angela's video game.]
Oscar: I thought tonight was going to be the most special night of my life! And all I wanted was that one dance with you, Bea! [gasps] Oh, I didn't mean to say that!
Angela: [shocked] Woah...Bea? Woah. Woah. Woah!
[Angela turns to leave.]
Oscar: Angela, wait!
Angela: Woah! Woah! Wo-ho-ho! Well, Bea! Oh, wow! Wow!
Oscar: Woah.
[Shellsea is cleaning up Bea's dress.]
Shellsea: Here's what you do: [????????????]
[Angela comes up to Bea.]
Angela: He's all yours, Bea!
[She cries as she swims away]
Shellsea: Dang! Girl's had the taco-milkshake combo!
Bea: Yeah...I guess. 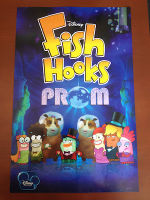 A poster for the episode given away at the San Diego Comic-Con.

Characters in the cast shot: 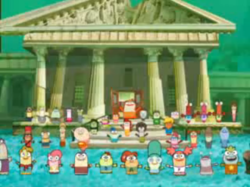