Girls Griping at the Gym 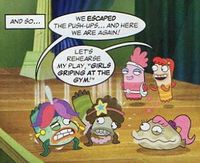 A rehearsal for the play.

When the lead actresses, Koi and Finberley came down with The Ick, Milo and Oscar filled in for them at a rehearsal. The two had escaped from gym class and were not going to do push-ups - which they would have been doing. They took off their costumes and headed for the Hokey Poke, but when they saw their gym teacher Coach Salmons in the hallway, they took a shortcut instead. Unfortunately for them, Jocktopus Vandenbush turned up (again) and chased them around the school until they ended up back in gym class. (Gym Class Getaway)