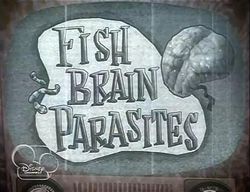 The title card of the movie.

Fish Brain Parasites is a horror movie that focuses around fish getting brain parasites from aliens that live on a distant planet. Milo forces Bea and Oscar to stay up with him to watch the movie. After it finishes, Milo gets scared that fish brain parasites will get him in his sleep and stays up all night. After watching the movie, Oscar gave it a bad review online. Principal Stickler has got the movie on DVD. ("Parasite Fright")

During a thunderstorm, Jimmy, a fish, is put to bed by his father. His father warns him about not going to sleep, as he has heard reports of fish brain parasites being around that night. Jimmy closes his eyes, and an alien appears at the window. The alien comes through the window, when Jimmy's father comes into the room to check on his son after he heard a noise. A flash of light and the alien goes inside Jimmy's head. Jimmy suddenly opens his eyes. His father yells out "Why did you fall asleep, Jimmy? Why?!". His father rushes Jimmy to the lab. At the lab, one of the scientists prove that Jimmy has got fish brain parasites, as when he prodded him on the eye, Jimmy didn't show any emotion. The other scientist isn't convinced and kicks the board which Jimmy is on to the floor of the laboratory. The scientist then falls asleep, not listening to the other's instructions on not to, when another alien appears, and in a flash of light, goes inside the scientist's head. The scientist then suddenly opens his eyes and as the movie ends, the other scientist yells out "Curse you, fish brain parasites!".

The film was filmed in black and white despite some color aspects in it. The 'fish brain parasites' were colored green and its flash to go into a fish's brain was yellow. The fish brain parasites were aliens cut out of green cardboard, and held by string from above the set. In the filming, real tanks were used, and special effects were probably used so the parasites could travel into Jimmy and Louis' brains.

The film received great decline in popularity, and when Oscar, his friend Bea, and his brother Milo, watched the film, Bea told Milo she wanted to watch a show called "Eat, Swim, Float". After the film finished its airtime, Oscar gave the film a bad review online. The film gave Milo nightmares, and refused to fall asleep as the parasites would supposedly enter his brain. The next day, he teamed up with Principal Stickler, the now-former Freshwater High school principal, to rid the parasites of a student, Albert Glass, who only turned green and looked like an infected fish because he drank a smoothie and put on a pair of sunglasses. Milo and Principal Stickler exposed all the fish to air and drained the tanks of water, from advice on a talk show one of the characters from the film starred in on how to rid the parasites of fish. The smoothie was drained from Albert, and after that everything turned back to normal. The film only lasts about 2 minutes and is aired late at night.

One of the scientists from the film appeared on a segment on the Doohickey Talky Show, which featured a tip on how to rid fish of their parasites. 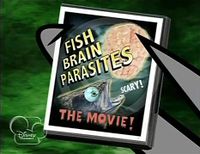