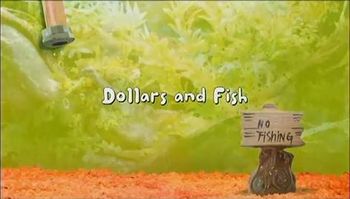 Randy Pincherson gives Milo some money so he can join Oscar and Bea at the Brandon Bubbler concert; however, to Milo's surprise, the money is just a loan and Randy is demanding he pay him back by night's end at 300% interest. After Bea and Oscar sell their concert tickets to bail Milo out, Milo must get a job to win back his friends' respect.

Milo working at the Hokey Poke[edit]